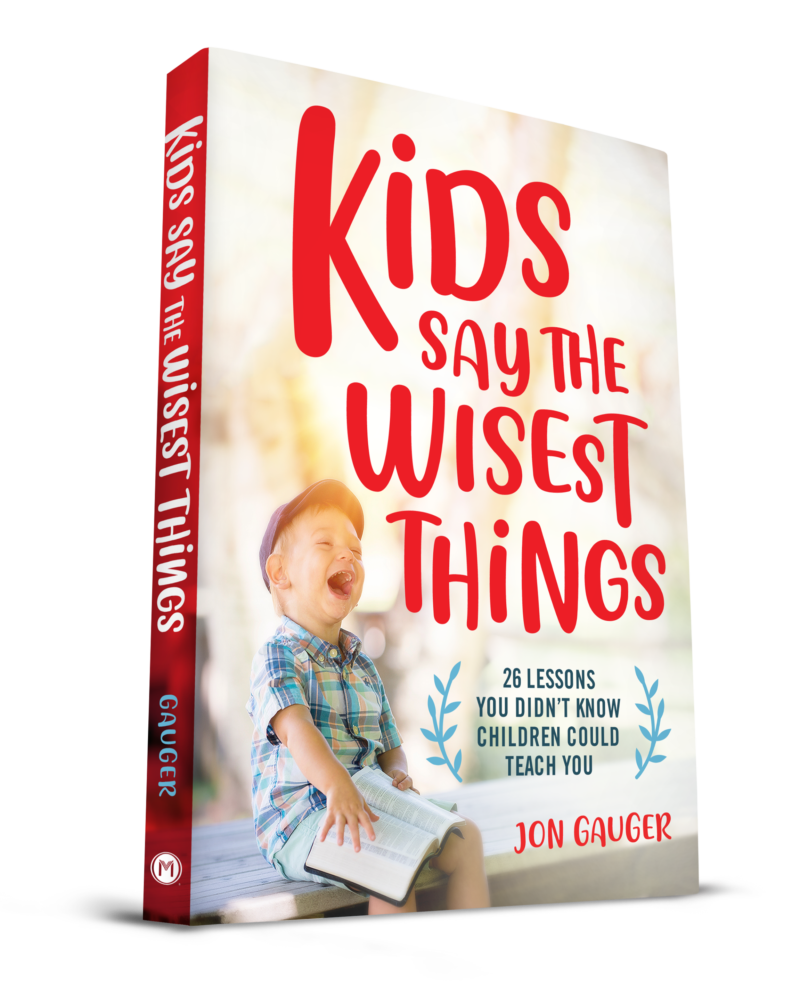 26 Lessons You Didn't Know Your Children Could Teach You.

Kids. Their conversations are more profound than we know!   In this engaging book, you’ll discover…

Great themes of the faith and of Christian living are explored, cloaked with enjoyable anecdotes about kids and their unwitting utterances of brilliance.

Kids Say the Wisest Things is stimulating for the believer, and because of its huge appeal, makes a perfect gift for any friend.

“These stories yank open windows into profound biblical truth. Funny stories.  Make-you-cry stories.  And all of them show us something about ourselves and our Savior we can never forget.”

“Here at Focus on the Family, we emphasize the importance of wise and effective parenting. In his latest book, Jon Gauger demonstrates that our kids sometimes exhibit wisdom and insight far beyond their years.”

“Take a journey with Jon through these stories and prepare to be taught by these pint-size tutors.  You’ll be the wiser for it.”

“Straight from the mouth of babes comes deep truth that will revolutionize how you understand faith and life. Jon Gauger brings fresh wisdom and inspiring insights that will restore your child-like sense of wonder.”

“A fresh look at how God uses children to help parents finish the process of growing up.”

“This book is crammed with surprising wisdom out of the mouths of babes—small tots with big thoughts. Start reading—class is in session!”

“God often speaks through words and faith of a child. The stories that Jon Gauger shares will encourage you to listen for God’s voice in the voices of your kids.”

“Settle into a comfortable chair, and enjoy Jon’s creative observations on the amazing wisdom that does indeed come “out of the mouths of babes!”

Dr. Charlie Dyer | Professor-at-Large of Bible and cohost of The Land and the Bookradio program

“You’ll walk away as I did realizing if I want to live life as a more loving and mature adult, I need to become a more teachable and child-like person once again.”

Robert Moeller | Founder, For Better For Worse For Keeps Ministries, Author, The 6 Hearts of Sexual Intimacy 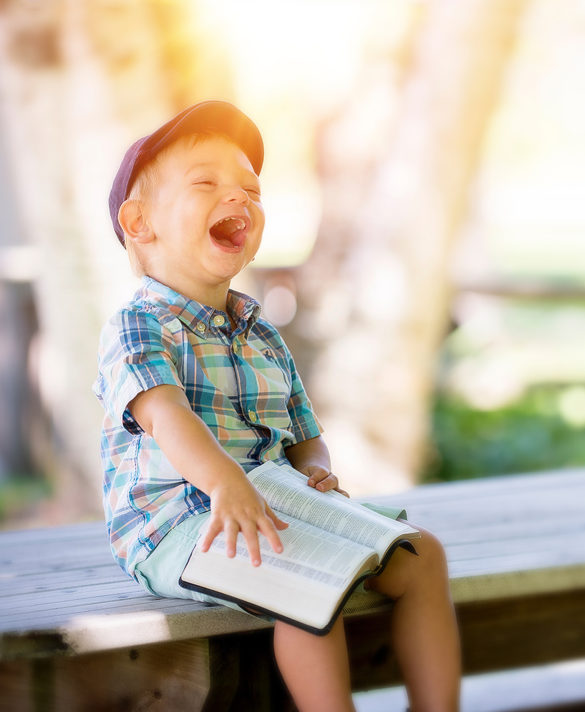 Jon Gauger hangs out with kids so much, most of them are pretty sure he’s one of ‘em!  When he’s not capturing their stories, Jon is an on-air host and producer for Moody Radio where he also does photography and videography. Gauger is the award-winning narrator of more than 60 audio-books and has traveled to 36 countries as a journalist or speaker. Jon has also written, If I Could Do It All Over Again and releases a weekly blog, The Thursday Thought, at Jongauger.com.  He and his wife, Diana, are never more alive than when camping, traveling, or playing with their (truly exceptional) grandkids.

If you’re looking for a boring speaker, you’ve clicked on the wrong page, partner!  Jon’s a story teller.  And people can’t help but listen to those stories.  From Australia to Zimbabwe (and lots of places in between) Jon has spoken at conferences, meetings and training events.  Some of his popular topics:

Jon is also happy to craft something around your unique event.

Little tots love everything to do with flight. Remember as a kid how you pinned a towel around your neck and pretended you could fly? Remember how you would run around, your arms stuck out like wings as you pretended to fly like an airplane?

Nate was one of those kids. And he had a grandpa who shared his love of flying. In fact, before Grandpa had his driver’s license, he’d earned his private pilot’s license. That’s somebody who loves flying!

So there they were—Nate and Grandpa—flying. Not in a real airplane, mind you. They were soaring with Microsoft’s Flight Simulator. But it might as well have been real. Grandpa had an actual airplane yoke controller (steering wheel for us non-pilots). The monitor was big. The speakers were big. And whenever they happened to crash the airplane—somewhat regularly when Nate was in the pilot’s seat—the booming sound was—well—really big. Booming, in fact.

The crash was loud enough that it scared young Nate. It got to the point that when Nate sat at the controls and sensed his Cessna was about to smash into the ground, he would say, “Here, Grandpa! You take it!” He’d bail out and run into the bedroom next door to hide. Sometimes Grandpa could pull the plane out of its nosedive, sometimes not. As for Nate, he loved flying—but hated crashing.

One day, the little pilot was at the controls of a big plane lining up on final approach. But the lower the aircraft descended, the higher Nate’s tension rose. Fearing the inevitable boom!, he showed signs of bailing out. As he prepared to eject, Grandpa told him, “Okay, Nate. I’ll fly. But this time, you need to stay and be the captain. You’ll need to talk to the passengers.”

And that’s what they did. Grandpa executed a series of near-heroic flight-saving maneuvers while Nate grabbed an imaginary microphone and spoke authoritatively into the PA. “We’re flying now. We’re coming in now.”

Under Grandpa’s skilled hands, the plane landed without incident and—more importantly—without a boom. Safely on the ground, Grandpa said, “Nate, maybe you better talk to the control tower.”

I’m not sure if they got the gas—or the popsicles. But I am sure of one thing: Nate’s decision to let a true pilot handle the controls when the flying got rough was a good one.

That same advice is right for you and me. We need amore experienced pilot than ourselves in charge of our flight through this world. The thing is, nothing looks easier or more fun than sitting at the controls of your own life—hand on the throttle, feet on the rudder pedals. But in the deception lies the danger.

For all of us would-be pilots, unwilling to relinquish the controls, Proverbs 14:12 warns, “There is a way that appears to be right, but in the end it leads to death.”

No one has ever said, “I think I’ll choose a life course that will land me in failure. Or loneliness.” No one ever deliberately set the compass of their lives fixed on the eternal destiny of hell. But nevertheless, many will be there.

Clearly, we are prone to potentially fatal distraction and misdirection. We tend to be pretty sure we know in which direction to head—and how to get there the quickest way. But eventually, disaster strikes. If not in this life, then in the life to come—when it’s too late to make a course correction.

In the world of airplanes and navigation, pilots who refuse to trust their compass and other instruments open themselves up to a sense of misdirection called spatial vertigo. Pilots utterly convinced they are heading in one direction end up in just the opposite. The result can be deadly. Same for you and me, spiritually.

The famous bumper sticker that says, “God is my copilot” is quaint—but entirely inadequate. We have no business sitting in the pilot’s seat—or demoting God to a copilot role.

Deuteronomy 31:8 speaks to the unfailing nature of God’s direction. “It is the Lord who goes before you. He will be with you; he will not leave you or forsake you. Do not fear or be dismayed” (esv).

Consider also the infinite capacity of God as our navigator. Second Chronicles 16:9 assures us, “The eyes of the Lord range throughout the earth to strengthen those whose hearts are fully committed to him.” Imagine a pilot who can fly while simultaneously having his eyes moving around not just in the immediate vicinity, but “throughout the earth.”

On longer international flights, laws dictate that a pilot can fly only so many hours at a time. After that the crew must be replaced with a second set of pilots while the weary get some mandatory sleep in the crew rest—beds on board the aircraft.

If you have never asked Jesus to be in charge of your life—to pilot your soul—why not do so right now? You can pray a prayer as simple as this:

Dear God, I agree with You that I’ve made a mess of things, grabbing the controls of my life. I have sinned. I believe You died on the cross to pay for my wrongdoing. Please forgive me. Please take charge of my life—be the Pilot now and forever. I look forward to one day being in heaven with You. Amen!

Surrender the pilot’s seat. Let the Lord handle your destiny. I can’t guarantee there’ll be popsicles when it’s over. But the destination will certainly be even better—heavenly! 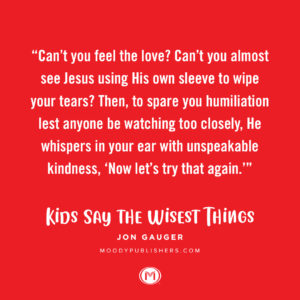 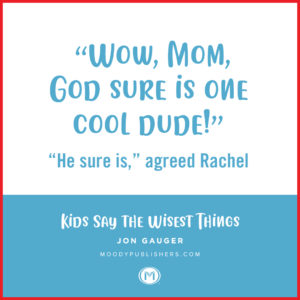 Order Now From These Fine Locations